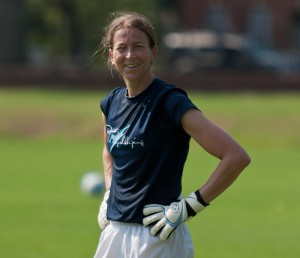 Not bad for a player whose career was almost derailed by a broken back suffered during a high school basketball game.

Since retiring as an active player, Tracy has devoted herself to teaching and coaching, and was head soccer coach at Greensboro College in Greensboro, NC before deciding to devote herself full-time to Dynasty Goalkeeping. 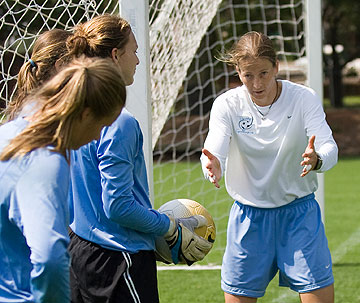 In addition to her impressive playing resume, Tracy brings a strong teaching background to her work with Dynasty athletes. From 1991, her freshman year at UNC, she has coached young goalkeepers through the Soccer Plus Goalkeeper School, founded by former U.S. Women’s National Team coach Tony DiCicco. After graduating from college Phi Beta Kappa, with a degree in Biology, she served as goalkeeper coach at UNC-Greensboro for the 1999 and 2000 seasons. While head coach at Greensboro College her teams finished second in the USA South Conference in both the 2004 and 2005 seasons. She holds her USSF “A” license and NSCAA Premier coaching diploma in addition to being a NSCAA Goalkeeper Staff Coach.

Success was not a given for the North Andover, MA native. Her back injury and subsequent surgery made her sit out her junior season as goalkeeper for North Andover High School. Even though she recovered to put together a 19-1 senior season and take conference player of the year honors, college recruiters had backed off. She went to North Carolina, made the soccer team as a red-shirt walk-on and battled highly-rated prospect Shelley Finger for the top goalkeeping spot over the next three seasons. Despite splitting games with Finger through her senior season, she posted a 0.39 goals-against average and got the starting nod for that year’s NCAA tournament. Her clutch goalkeeping work helped the Tar Heels knock off top-ranked Notre Dame for the Tar Heels’ ninth straight national crown. She was named the team’s most improved player for the 1994 season, and took the first of her two career All-ACC honors. In 1995, she was named the Tar Heels’ MVP and an NSCAA All-American.

As a pro, Noonan (Ducar) won the Breakers’ Shield Award for community involvement in 2001, the same year she was inducted into the New England Sports Hall of Fame.