Mikayla Krzeczowski – Transition to the Pros

A native of the Atlanta metro area, Mikayla Krzeczowski is a LONG time Dynasty student.  She first started attending Dynasty at age 14 in 2013 at our Atlanta Winter Camp.  She was hooked from then on and attended summer and winter camps all through high school and into college ultimately transitioning onto staff heading into her senior year of college in 2019.

As reported in our previous DGK in Action blog, Krzeczowski a recent South Carolina Gamecocks graduate signed her first pro contract to play for FC Jumonji Ventus in the Nadeshiko League 2 of Japan. League play was suspended play due to Covid19 in the spring and started back successfully in July. 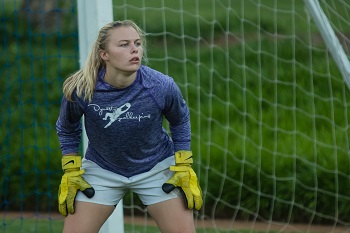 To recap for those who may not know Mikayla, she had an AMAZING collegiate career as a four year starter for the Gamecocks compiling 89 career games!  She was selected All-SEC every season and SEC Goalkeeper of the Year in 2019. Her 50 career shutouts are the most ever in SEC history and third best in NCAA soccer history.  And her 0.45 career goals against average is 8th overall in NCAA womens’ soccer history and best all time in SEC history.  WOW!  Those are some well earned honors and IMPRESSIVE stats!!!

I recently caught up with Mik via email to get an update on how her transition to the Pro game and living in Japan during the pandemic has gone.  Here is what she had to say!

In January I signed with my agent Lenny Lun of Upper V Athlete Management and I told him from the start that I wanted to play professional soccer at a high level and I was willing to take my skills overseas. Lenny has a contact on the west coast who is an American recruiting contact for one of the biggest sports agencies in Japan and FC Jumonji VENTUS was moving from the Nadeshiko League 3rd Division to the 2nd Division and they were looking for a goalkeeper so in February Lenny called me with this opportunity, the deal moved pretty quickly and after about 2 weeks of talking to my family and gathering more information about Japan, I signed the contract and they had me on a plane to Tokyo in early March.

I am not 100% sure about that. I know that VENTUS signed another American and she was supposed to be here the beginning of April, but when the coronavirus hit Japan hard the government closed the borders before she could get on her flight so as of right now I am the only American playing in the 2nd Division of the Nadeshiko League.

The biggest differences I have noticed are the speed of play and technical abilities required with distribution. (I will break that down more in question 6)

First touch, footwork, body control, distribution techniques, communication (because it is a foreign language), tactical adjustments with a 3 back, field of view (which for me means seeing all the field not just defensively, but offensively too) and I’ve had to completely gut my mentality over these last few months rebuilding it from the ground up.

Practices are late in the evenings because many of the players have day jobs so I’ll wake up around 8-9am, make breakfast, early morning stretch, check emails and social media because I am a full 13 hour ahead of the eastern time zone so my mornings are where I do most of my communications. Then twice a week around 11am I’ll go for a jog up to the facility and use the weight room to get a short, explosive lift in, I come home, make lunch, shower, watch the film our coach sent out that day and between about 2-5pm I try to switch it up every day between reading, cleaning, getting coffee with friends, etc. 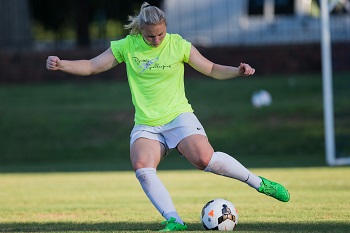 The speed of play seems to be everyone’s ‘go-to’ answer so let me elaborate on what I’ve experienced from a goalkeeper’s perspective at the next level. My team started out the season playing a 3-4-3 so this style of play requires fast in/out of possession transitions. It occurs faster than the blink of an eye and depending on the level of our opponent, very often.  The Japanese require their goalkeepers to contribute to the playmaking side of the offense which means I am not just helping switch the field or to be an extra man in the back when the team is building up.  They teach goalkeepers to play in very tight spaces under high levels of pressure, sometimes building the ball out of their own 6 yard box with a forward right in their face. This style of play is because the Japanese value possession more than they fear the high press which sometimes can put the goalkeeper way out of a defensive position to make saves if a turnover were to occur so in order to prevent serious damage defensively. I’ve had to not only match the speed of play that is already faster than what I’m used to but I’ve had to find a way to be 3 steps ahead of the press all while making decisions offensively with my distribution and moving across the backline like a third center back. By the end of practice I’m exhausted; not just from the physical side of things, but mentally drained from making thousands of decisions at such a high level of play.

As for the technical abilities with distribution, this not only requires you to be able to hit a 55 yard ball on a dime while switching the point of attack, but what I’ve had to figure out and improve big time was my first touch.  Most goalkeepers, especially at the college level, are considered great distributors if they consistently touch to the left and the right just a step and a half away so they can help continue the ball across the back or clear lines of pressure if the situation presents itself.  However at the next level you need to be able to take a 8 yard touch between two high pressing forwards, take a negative touch to allow yourself the space to clear the ball, sometimes you get half a yard to open your body onto your left foot to play your outside back who is 30 yards up the field with pressure right off your hip.  The demands are insane and over these last 7 months I’ve improved my situational awareness as well as my field of view. I feel like Japanese soccer has allowed me to develop field player like senses and instincts and I’m still learning the different touches and techniques to make my play more efficient and accurate.

On April 3rd Japan declared a state of emergency which put a halt to all sports, very similar to the U.S. and many other countries. I was quarantined for 2 months, no training and very few outlets to work out and stay mobile.  I made due with what was available to me and once a week our team would jump on a zoom call to do a workout with the trainers. Every morning in quarantine we had to fill out google doc forms with our body temperature, overall condition and any injury reports if needed.  The season got pushed back to start in the middle of July and when the quarantine was lifted we had about 4 weeks to prepare. Thankfully everything picked back up quickly and the season was able to start with no trouble.

Japan is a beautiful country with a rich culture and so much to offer. I live alone in an apartment near the facilities in Niiza City which is about a 45-minute train ride from Tokyo. The way of life is not drastically different and as an outsider if you pay attention to your surrounding areas and the way people go about their business then it is easy to pick up on the little things that will help you fit in. The biggest thing I’ve come to love about Japan is the food! Their food stores are filled with fresh local fruits and vegetables, so it makes shopping so easy because very rarely is their food laced or pumped with steroids, hormones, or anything that is out of the ordinary. The selections are seasonal as well so I know what I’m getting is guaranteed to be fresh. 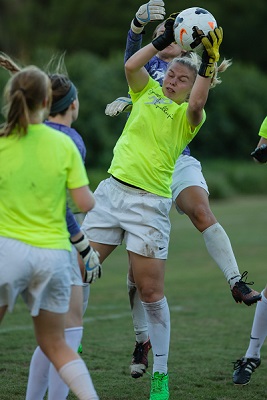 Sidekick Sally. I was probably 14-15 years old and Sally was the first ever soccer robot I had ever seen. When I caught my first ball from her I thought I broke all my fingers!  I really didn’t but that ball was coming in HOT and that’s when I knew Tracy (and Sally) meant business! 🙂

Dynasty provided me with decades of Tracy’s personal experience all wrapped into great training environments which at a young age allowed me to grow at a very fast rate. I took all of what I could from Tracy’s game, as well as her coaching staff, and created my own style of soccer. Tracy’s mentorship gave me the tools to conquer the college game, from eating right to fitness and high intensity training.  At Dynasty you’re not just being molded into a great goalkeeper, you’re being molded into an even better human being. All of this has given me the courage to pursue the next level and take my professional career head on.

My first start was not the fairytale shut out/win that every goalkeeper hopes and dreams for. I was nervous and jittery, but once warm ups started I got into a really good rhythm. The first 30 minutes of the game was going really well, I had already made a few saves and my distribution was accurate. The defense was playing really well and then after a turnover the opposing team won a PK and scored putting us down 1-0. After a long and difficult 10-15-minute high press we were down 3-0 after they scored back to back breakaways. Going into halftime I was frustrated because of everything that had happened in the last 15 minutes or so were due to communication errors. In a three back communication is incredibly important and the language barrier was already putting me and my backline at a disadvantage, but my number one job is to keep the ball out of the net so mentally I was trying to stay positive. The second half came and my team was not able to create many opportunities and the opposing team high pressed us the rest of the game. We ended up losing 5-0.  Five goals against in my first ever professional start, boy was that a slap in the face! The most goals I’ve ever allowed in a single game in my 10 years of being a goalkeeper. But the crazy part was that I also had 12 saves, the most I’ve ever had in a single game in my 10 years of being a goalkeeper. I can honestly say I’ve never learned more from one game!  Since then the team improved and we’ve gotten better over time. My communication level improved drastically from game one to game five, six, and seven.  I think nerves had a little bit to do with my mistakes throughout the games, but the saying remains true ‘you learn more about yourself in the loses, not the wins.’