Where Are They Now – Kelsey Graham

December 15, 2017Tracy NoonanWhere Are They Now

Where Are They Now?

Dynasty Goalkeeping is so much more than becoming a better goalkeeper and succeeding on the soccer field.  Certainly that is a short term goal of ours, to help every student become their best version, but our long term vision is much greater.  At our core we take pride in developing leaders beyond the field, getting our students to expand their scope of self, and empowering them to make a greater impression locally and globally.  That is where our true impact lies.  This blog was developed to highlight our Dynasty alumnae and reconnect you with former students as they make their way in the world.  Personally, I think we have a tremendous family of alumnae and I want to share their journeys with you.  Hopefully their stories will inspire you onto greatness of your own and open you up to possibilities you never previously imagined! 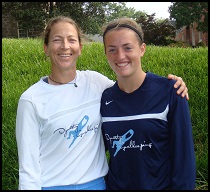 In 2010, I had the privilege of attending Dynasty Goalkeeping camp and training alongside some very talented goalkeepers.  I remember my week of camp being one of the most challenging, but simultaneously encouraging experiences of my soccer career up to that point. It was a week where dedicated goalkeepers gathered together to make each other better and to learn from one of the best, and I loved every second of it. While at camp, I began to learn what it takes to get to the next level and as I left camp I was better equipped to put in the work that would be needed. I had my sights set on a Division I school and I believed that with more work, I could achieve my goal.

And I was right! During my senior year I committed to attend Baylor University and my plan was unfolding perfectly. However, God had other plans. Without really knowing why, I felt that Baylor was not where I should go to school, and I decided instead to attend Wheaton College in Illinois. Wheaton was an accomplished DIII program with three National Championships in recent years. The team was incredibly talented and always nationally competitive. I discovered that deciding to go to Wheaton would not be sacrificing “good soccer,” but would allow me to play at a high level and also afford me the time to pursue other interests.

While at Wheaton, I was a part of very successful teams, earning a trip to the Final Four twice in my career, and being

National Runner-Up my freshman year. Trust me, losing a national championship is not fun, but as I look back, it was an incredible experience nonetheless.  My senior season I was playing the best soccer of my career and was named an All-American, the National Goalkeeper of the Year, and NCAA Woman of the Year Finalist. My team was top ranked and we had our sights set on a title run, only to be upset in the first round of the national tournament. Another heartbreak.

But college soccer is about more than the results and accolades. My career at Wheaton College provided me a life-changing experience. We had lots of ups and downs and we faced them together, as a team. Upperclassman invested in me and showed me what it meant to give your everything for something bigger than yourself. As I became that upperclassman, I had the opportunity to lead the team and try to be that example as well, while always learning from each of my teammates. We became sisters on and off the pitch. Something that my coach often said was that “the soccer field is our mission field.” I didn’t always know what that meant, but I learned.

Soccer is more than a game; it’s a language. Soccer has the ability to break down barriers, to draw lines of commonality instead of division, to bring strangers together. As a program at Wheaton College, that was our goal. I had the amazing opportunity to serve alongside my teammates not only during the seasons, but also on a mission’s trip to Brazil and Paraguay. There we saw firsthand how soccer can unite total strangers. A simple game can create relationships that change people’s lives… I know it changed mine.

As you all know, we go to college to be student-athletes. When I wasn’t playing soccer, I was busy studying Spanish and Christian Education and Ministry. I had the opportunity of also being a part of several different outreaches during the off-seasons, including soccer coaching and the Honduras Project, a student-led program that raises funds to install a water system for a Honduran village over Spring break. While in Honduras, I again saw the power that a soccer ball has to create relationships and bring people together.

Each of these experiences, traveling to Brazil, Paraguay, and Honduras, learning Spanish, studying ministry, and playing collegiate soccer, all shaped me into who I am and led me to my current place in life. 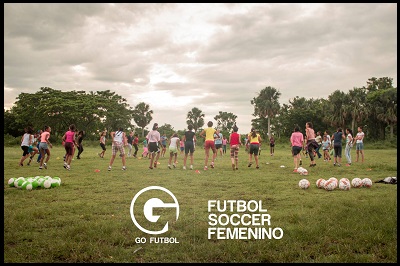 Today, I live in the Dominican Republic and serve with GO Ministries as the Director of GO Women’s Sports. I have the privilege of starting and developing soccer, basketball and volleyball programs for girls in my community. With the ultimate goal that every girl will come to know Jesus as their Lord and savior, we create sports programs for girls to participate in, where they will have a safe place learn from a positive female coach and grow into leaders who impact their community.

You and I had opportunities to play club soccer. We grew up where park-districts hosted in-house league for boys and girls, where afterschool sports were encouraged and no one thought twice about letting you play at recess. The Dominican Republic is worlds apart from that. In a machismo culture, boys have much more freedom than girls. A mere 25% of the population graduates high school and 30% live below the poverty line. More than one third of homes are single parent led, 90% of those being single-mothers. Teenage pregnancy has become normal as 27% of females have children by the age of 18. To be a girl in the Dominican is to grow up quickly with the expectation of keeping a clean house, babysitting your siblings by the age of 8, and likely to be a mom of your own children not long after. Sports are for the boys. That’s just how it goes.

At GO Ministries, we want to help change that. We believe girls should have the chance to be kids, to play and have fun, just like the boys do. We want to provide young women the opportunity to cultivate discipline and leadership, to improve their critical thinking and teach them how to work in teams. Sports are much more than a game. They have the potential to change the trajectory of a child’s life. Combine that with the power of the local church behind them, and people can truly be transformed.

My desire is for every girl who participates in a GO Sports Academy to be challenged and encouraged, just like I 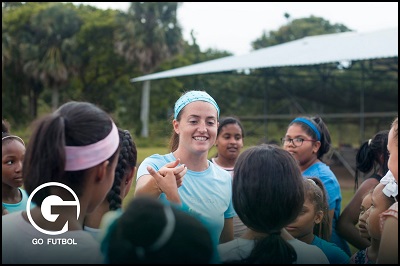 was during my week at Dynasty Goalkeeping. To be pushed and equipped with skills, not only about the game, but also for life. I want them to have a coach who cares about what is going on at home, who knows them well and pushes them to become better. I want them to know their identity and be proud of who Jesus created them to be. I pray that they will never doubt their value and always know they are worthy of love.

This ministry is not easy. It’s messy and difficult and frustrating, but it is worth every minute of effort. In the end, it will only go as far as God takes it. I can spend my entire life working hard to create the perfect soccer academy, but if God is not the Head Coach, the real work will not be achieved. Thankfully, I’m pretty su   re He loves sports too.

I am grateful for the many coaches, teammates, friends and family who poured into my life over the last 24 years to help me get to where I am today. I hope that you too have people in your life who encourage and challenge you. And if you don’t, start to kick around a soccer ball, my guess is some pretty cool people will come to join your team. 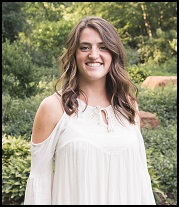