The Women’s World Cup is right around the corner!!!  Time to get ready to cheer on our team!  If you haven’t already seen the “23 Stories” of the 2015 U.S. Women’s National Team World Cup roster I would encourage you to check them out on the US Soccer website.  Our former Dynasty staff coach, Ashlyn Harris is featured!  Her story is one of many great ones!

After 2 seasons as a reserve gk in the NWSL (Portland Thorns and Washington Spirit) former Dynasty student & staff coach Adelaide Gay has decided to continue her professional career abroad.  She is currently the starting goalkeeper at Kvarnsveden (Swedish 2nd Division).  Go Addy!

Congratulations to Clayton State rising senior Charlotte McCormack (Wexford, Ireland) for her first call up to the senior women’s squad for the Republic of Ireland!  Charlotte was in the youth national team program growing up in Ireland (that is where Tracy first coached Charlotte!) and decided to continue her career here in the United States to expose herself culturally and to a higher level of soccer to hopefully develop her game.  Looks like the decision is starting to pay off as Charlotte was the reserve goalkeeper in the recent Women’s  World Cup sendoff series match between Ireland and the U.S. Women’s National team that the U.S. won handily 3-0. 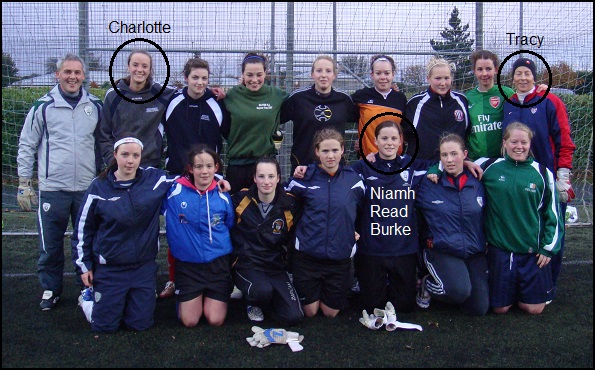 On an aside the starting goalkeeper Niamh Read Burke (who was quite busy and had several impressive saves) has ties to Dynasty Goalkeeping as well!  Niamh was in the youth national team pool that Tracy coached both in 2007 and 2008 on trips to Ireland (see photo) to work with the Football Association of Ireland (FAI). Tracy recently caught up with Charlotte following the game on May 10th and here is what she had to share with Dynasty: “What an experience! It is hard to find the words to describe it all, but I will try. Niamh was busy and had a fantastic game.  I was so so happy for her! I know she had to be nervous, but she dealt with it so well.  She was so focused all weekend and obviously prepared to her best because she was outstanding!  Not that she isn’t usually outstanding, but to perform in such a big game (and against the likely future World Cup champs) is a big task! Start of something big for her I reckon! Overall, the experience was incredible!  US fans are awesome!  So supportive, enthusiastic, sporting, appreciative and they seemed to love us almost as much as their own team! 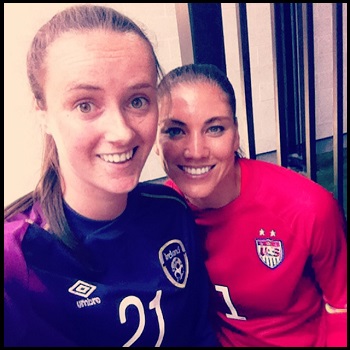 For us (Ireland) it was so crazy the way we were treated. I mean the USWNT are of course celebs here, but everybody was treating us as if we were the Irish equivalents , which is not what we are used to back in Ireland!  🙂 To even be a part of the team this weekend was a huge honor for me and the reaction we got everywhere we went just made it even more special. They were asking us for autographs and pictures, we signed a whole bunch of shirts, balls, programs, etc which is bizarre!  Coming from Ireland where you almost have to pay people to come to the games and Clayton State where I’m used to a few parents in the stands it was so crazy!! I am so happy to have had this opportunity.   It has given me a whole new level of motivation to get to the point where I can be a permanent member of that squad. I tried to measure myself up with Niamh in training and I am now starting to believe my goal is more within my reach than I previously thought.  I know I need to work on my speed of play, my organization skills, and overall presence.  Athletically I was able to hang, I felt comfortable with crosses and long balls, and I think my footwork and distribution skills matched up also.  I know I have a lot of work to do, but I now think it’s possible!  It’s definitely something I am going to strive for now.  I am so thankful for the opportunity and new motivation.  I’m going to work hard and keep coming back better!”

Congratulations to the following Dynasty Goalkeeping students who will be continuing their academic and athletic careers (unless noted) at the following colleges this fall:

MALLORY FAHLER – University of Kansas (plans to focus on her academics)

MORGAN KLENKE – University of South Carolina (plans to focus on her academics, play club soccer, and get involved in other clubs on campus as well as volunteering!)

(I apologize to the Dynasty students who are absent from this list. If you are not listed it is because I did not know your college choice!  The 2016 class won’t be featured until May of 2016 even though I know several students have already made verbal commitments.) 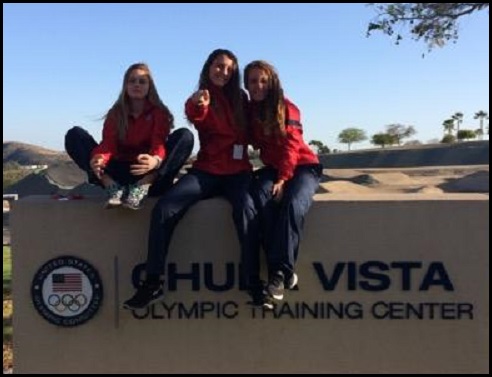 Katherine Asman meditating about goalkeeping on the left.

Congratulations to Katherine Asman for being called into another U16 U.S. Women’s National Team training camp!  It is hard enough to even be considered for one national team event, let alone become a consistent member in camp.  Kat is working hard to maintain her status in the national team pool in the coming year so she can remain in consideration for the 2016 U17 FIFA Women’s World Cup and beyond! 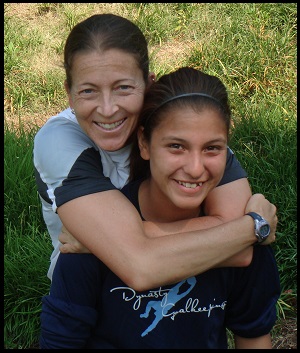 Congratulations to Tompkins High School sophomore goalkeeper Cailey Croson for being named to the 19-5A All-District First Team in her first season playing varsity!

Congratulations to Saint Benedict at Auburndale High School senior Bailey Coppedge for the array of honors she was awarded recently at her high school graduation.  The list includes: