My rookie year (2015) I played for Seattle Reign. I was an undrafted free agent after college. Then Seattle picked up my rights, brought me on as an amateur and eventually signed me. I had a tough decision to make at the end of 2015. I could stay in my current position as a number three, or try to go play somewhere I could compete to start. I made that decision, and was signed as a free agent by Sky Blue FC in early 2016.

I think the number one difference is the speed of play. Teams are so good at transitioning quickly from defense to offense and you have to be ready at any moment. The talent level is obviously the best in the word as well. I would say that details matter a lot more in the professional league also. In college, you can get by with a few mistakes here and there, but in this league, details win or lose games.

I have made huge adjustments to my nutrition. I now eat for my blood type, and realize that I need better fuel in order to play at the highest level. I can tell a huge difference when I haven’t eaten enough, or am dehydrated. My strength and conditioning has changed as well. It’s important to be goalkeeper specific. Fitness is important, but being strong and agile is even more important. There are big, strong girls in the league. If you aren’t solid, you’ll get knocked out of the air. If you aren’t fast, you’ll get beat to the ball in 1v1s. You have to be the total package in order to succeed at the highest level. And I am definitely still in pursuit of that!

Typically, I wake up around 7:30 and make coffee. Then I make an omelet and Ezekiel break toast and read the news. I then have about a half hour drive to practice. When I get there I have treatment. It’s more of exercises to prevent injuries. Which is incredibly important to staying healthy. Some days we have 30 minutes of film before training. We then have team training from 10am to anywhere around 12 to 1 dependent on the day. Afterwards, I will ice bath, or do any other treatment I need depending on what knocks I picked up. Then I grab lunch with teammates or head to Whole Foods and go home. Twice a week, I have lifting followed by coaching. But the other couple days I have the afternoons to go to physical therapy, nap and catch up on emails. I’m working on other side projects to ensure I have opportunities off the field. You never know when your last game will be! So I think it’s important to always pursue outside opportunities, and stay connected with people. I go to bed early! Sleep is the best form of recovery. Wash, rinse, repeat 🙂 That’s my day! 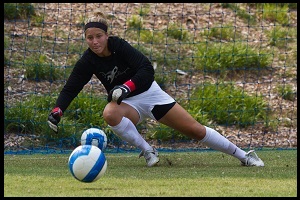 My favorite Dynasty memory was my last time as a camper at Pro Week. We has such a competitive group of girls! We were playing Star Wars, and I was just in flow. Completely in the zone. I was rolling through the other team one person after another, racking up my points. But, I was also thinking to myself, “Holy crap I am so tired!” Then Tracy, of course, steps in and throws the ball upper corner to get me out. I just rolled my eyes and shook my head. The master is still the master. But what a fun week it was! Every single drill, every session of every day you had to BRING IT! That’s when you grow, that’s when you’re challenged, and that’s when soccer is so much fun.

Dynasty changed me as an athlete, a goalkeeper, and a person! Dynasty showed me that there’s a VERY thin line between myself and my competition. Mentally, I grew so much through high school going to camp. It was very important to see that people were just as good, if not better than me. As goalkeepers, we get used to

starting for our own club team or high school. We get, comfortable. Dynasty got me more comfortable with being uncomfortable. It made me realize that success is never given freely, it’s earned through sweat and tears every single day. It gave me a training environment as close to professional as I could’ve gotten. It was also the first time someone had told me that I needed to look at what I was eating. I grew up in Missouri where we are corn fed! Haha! I grew up eating lots of meat, vegetables and tons of carbs! I think I ate my weight in bread daily. I quickly realized that food is about balance. I made my first salad at Dynasty. Shocking, I know. The attention to detail changed me as well. Breaking down technique and seeing video is a luxury many young goalkeepers never get! The hands-on, world-class coaching gave me the attention and constructive criticism that I needed to improve and hone in on my craft.

7. What was the training environment like with Hope? What things did you pick up on from her and her experience?

Training with Hope was incredible. She was patient and encouraging, which as a first year rookie was everything I needed from a starting goalkeeper. Simply watching her every single day made me better. I got to hear her talk out different situations and the decisions. My technique was completely changed to mimic her as best I could. We have similar athleticism, so we play similar in the sense that we can play a higher line, come out quicker, and are strong enough to go into challenges. She’s the best in the world. And I got an inside look at just exactly why she is. I am very grateful for everything Hope did for me.

8. How have you managed the competition for the starting spot at Sky Blue?

At first, I was so hyper focused on my mistakes, that I started playing into them. I broke myself down completely, and destroyed my own confidence. I became mentally weak. I found myself saying, “This isn’t fun. I am not having fun.” I finally was given a piece of advice to focus on the good, and feel why it was good. Then, to strive for that feeling. Whether it’s catching, moving your feet well, or passing. Just find and focus on the positives.

Soon, I felt myself playing much more relaxed. I didn’t start the first game of the season. I was shocked. I felt that I had earned it. But apparently, not. So I decided that I would do everything in my power to make it obvious that I should be starting. This begins with attitude. I made sure that I had a positive attitude at training. With my teammates, with my coaches, and my competition. I can go cuss out the wall at home and cry in private. But in public, I needed to look unphased. Then my coach gave me the nod. He told me how impressed he was with my RESPONSE. That’s what life is about. It’s 10% what happens to you, and 90% how you respond. That’s one of a million reason why Goalkeeping is so MENTAL! I was starting, and learning a lot through my mistakes when the coach told me they were bringing an international GK in. I told myself to just train like she’s your equal. So what if she’s capped? Who cares. You play your game and focus on yourself. Long story short. I kept my starting spot. It’s about managing yourself, not the people your competing against.